Trapping is the primary system through which players can capture livestock and poultry to be placed in their respective Farming_Structures as producers. These animals then go on to produce Raw Milk and eggs, or if you choose slaughter, will drop Raw Meat and Raw Poultry, which after being processed into corresponding Processed Materials can then be used in Chef recipes. If slaughtered by you, they will also drop leather which is used in many other crafts. However if you let them expire in peace they will not drop anything.

Players begin by buying a trap, receiving a trap from completing a task or having a Maker create a trap for them. A player must then acquire bait either by buying it from an NPC or having a Chef cook a bait for them. Optionally a bait can be earned through a task. Once you have a bait and a trap, you can place the trap anywhere in the overworld by using the Set Trap button in your action bar (default hotkey: 4), and bait it.

To do so, walk over the placed trap to enter the Trapping Encounter, click on the trap in the center of it and bait the trap within the encounter by drag-and-dropping the bait from your inventory into the trap's interface. After being successfully baited, the trap should display the word "baited" in red above it.

Leave the passive encounter and let your trap take some time to work, which will depend on the trap used. If you come back and the trap is bouncing, then you have trapped an animal.

Be aware that some smarter animals can steal your bait and leave an empty trap, so remember to check your traps regularly. If the trapping attempt was unsuccessful, you can bait the same trap over and over before it times out in 24 hours. Success chance is based on your Luck stat.

You can trap Fresh Fish on land. Admiral Akbar is not warming his kin enough!

Your trapping level affects quantity of traps you can place at a time.

The time required for a trap to catch anything differs according to its quality. While a Primitive Trap can be purchased from Tybalta's shop for 10 triads, better quality traps can only be crafted by a Maker or purchased from other players.

The following table contains only base time required to trap anything. It can be less than that e.g. a Primitive Trap can at times catch something in 1 hour. 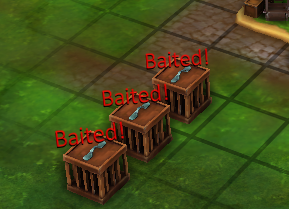 As you can see on the picture above, I have 5 traps set in a row of 5, but only 3 of them are currently displayed on this picture after I exited my BOO. This is well known glitch, just walk over the invisible traps to access them. It is important to memorize where you placed your traps, and to always use the same place for trapping so that if this glitch happens you can easily access them.