There are many statistical bits of information in the game, but when used by itself, "stats" refers to your 7 core stats. 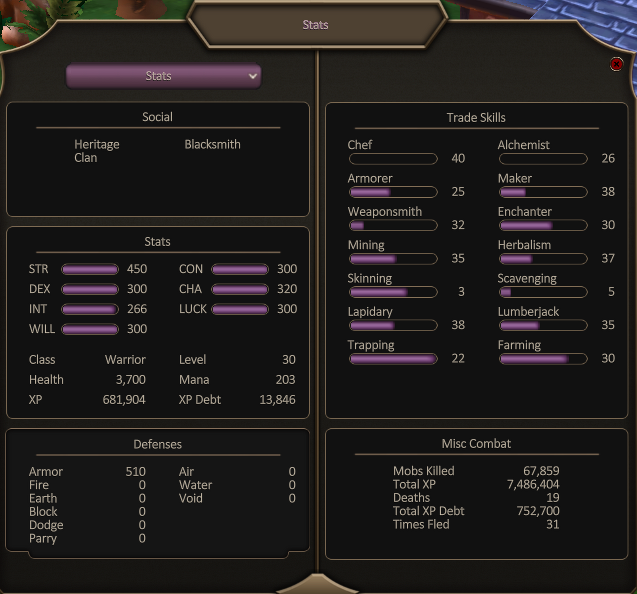 While being largely accepted without explanation in any game as customary, these parameters in Stash RPG are very important to understand and should be explained.

First of all, Stash RPG does not provide a routine "restore over time" feature. Many new players get surprised on why waiting so long and having no Health and Mana restored. This is the fact: Health and Mana will never normally regenerate over time. Regenerating it over time is only possible when inside the Rolling Stone Inn, or when using different kinds of camping bivouacs, either way this process uses up considerable amounts of time. Also, when using camps you are risking being ambushed by a group monsters. Therefore its is much more convenient to do "one click heals": instead, foods has to be eaten or potions drank, which makes procuring them the most important task in leveling a character. In combat, you cannot use food but only potions, they take up one turn to use and you are only allowed to drink one potion per so many turns, so keep it as a "panic button" for whenever you feel death is inevitable. Potions are not given separate cooldowns, so bringing several tiers of the same potion won't help at all, instead, bring the best one you got. Potions have huge joint cooldown in combat but not outside, where they can be spammed. Playing the Healer class greatly enhances restoration, although Healers have certain hold-ups when soloing due to weak aggressive DPS.

Health is increased permanently when you level up, or increases temporarily when you are buffed by an ability buff or a potion, or wear a gear piece with enchantments adding to Constitution, to an extent of 5 per character level for both ability/potion buffs and gear enchantments. It decreases only when you are hit or have a negative effect on you in combat. When your character's Health drops to zero, your character dies.

As stated above, Constitution adds to your health.

Mana is increased permanently when you level up, or increases temporarily when you are buffed by an ability buff or a potion, or wear a gear piece with enchantments adding to Willpower and Intellect, to an extent of 5 per character level for both ability/potion buffs and gear enchantments. It is consumed when you use abilities. It is possible to play without using any abilities in combat by only using the Basic Attack

(melee weapons or fists, you will swing a bow like a club using the Basic Attack). Some high level abilities consume great amounts of Mana. Therefore combat tactics should be executed and foods or potions should be used to quickly restore Mana after almost every fight.

As stated above, Willpower and Intellect both add to Mana. 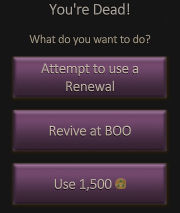 How to Improve Stats[]

Starting from level 6, eating food will gradually improve your base stat values permanently. Different foods will award you "stat xp" towards one (or more) of your stats. When you earn enough "stat xp" for a stat, it will increase by +1. You can eat food with max HP/Mana and still gain the stat increase!

Most foods are crafted by Chefs.

You can max out all of your stats, so happy eating!

1) If a piece of food is more than 10 levels lower than you, you will not gain stat XP from it.

2) At level 5 or below, your stats are already "maxed." Eating food will regain health and/or mana, but you will not gain stat XP yet.

Your base stats are capped at:

The maximum amount that gear can increase each of your stats is:

Example: A level 50 character can receive up to +250 per stat from gear.

The maximum amount that buffs, boosts, potions, abilities, etc. can raise your stats is:

Example: A level 50 character can receive up to +250 per stat from buffs, potions, etc.

The combination of base, gear, and buff stat caps results in a total cap of:

Example: A level 50 character can have no higher than 1,000 (plus racial modifier) in each stat.