Combat Encounter is one of the Point of Interest (POI) in the Stash RPG. It can be triggered intentionally or as a result of an ambush.

Combat encounters are represented by a POI in the image of one of the enemies you will face in that Combat Encounter. The number of monsters in a given encounter is determined by the number of party members in a group. The Combat Encounter can be engaged by moving your character to the same square as the Encounter's POI node. Moving to the square includes moving over the square, even if you are attempting to move past it. Encounters can be found both inside of dungeons and on the overworld map.

The numbers of monsters in a given encounter and their ranks are determined by the number of party members.

The difficulty of a encounter is displayed by the con color seen in the Point of Interest's surrounding base. You can also hover your mouse pointer over it to see additional details about the encounter in the form of a tooltip. This pop-out tooltip will let you know if the Point of Interest is a Combat Encounter by showing the con color of the difficulty and the name of the primary mob for this encounter.

The following chart shows the con color and the level of difficulty the color represents:

Once a combat encounter triggers, playing character will be taken to a combat screen.

In combat you can notice some floating text that appears in certain conditions. Both players and monsters can take advantage of the following tactical effects:

If you and an ally are on exact opposite grid squares of an enemy, that enemy is flanked and you and your ally both deal 10% more damage. 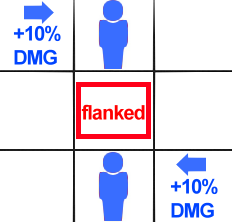 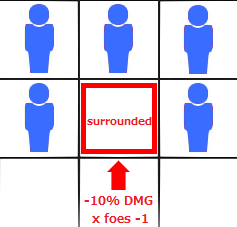 If you are in melee range with an enemy and there is an obstacle in the grid space opposite that enemy, they are pinned. If they attack you, they do 10% less damage. 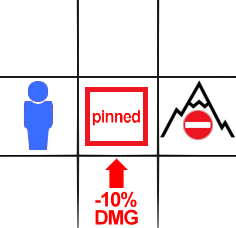 There can be combinations of tactical effects e.g.: 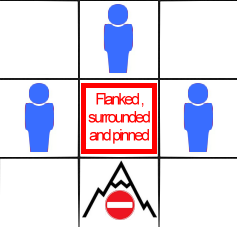 is a rewarded result that a player or a group of players commits to achieve and is a way of making encounters more dynamic. It can be assigned randomly during a Combat Encounter. Completing a Combat Objective awards bonus XP based on its difficulty and is optional and not directly tied to the winning condition of an encounter. Starting at level 5, it has a random chance to appear in combat and can appear in several encounters in a row, with the same objective possibly assigned several times in a row. Failing a Combat Objective has no setbacks other than losing the reward for the failed objective.

The following is a list of Combat Objectives assignable in the Stash RPG: