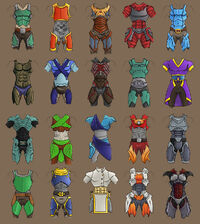 Armors are pieces of gear that can be crafted by an Armorer or looted from chests.

Class and levels play the biggest role in determining which armor a character can use. Each piece of armor improves the ability of a character to mitigate taken damage (Armor Rating), and some armors may even have modifiers that give it various bonuses (Enchantments).

The following is a list of Armor in the Stash RPG: